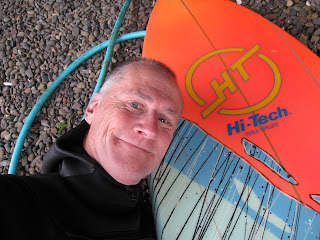 Greetings.
As part of the process of learning how to use some new software, I decided to make a short You Tube video showing off how much fun I had setting some new world records last week.
The concept is simple. Design a "stunt" showing off the MoaB (TM) repositioner and then go do it.
We've done this a few times with some adventuresome down winders.
But this time I made a "world record" contest out of it that others can do as well.

The rules: Create starting and end points by drawing lines straight across the river that intersect with Marker 14 and Marker 15 in the Columbia River between Cascade Locks, Oregon USA and Stevenson, Washington USA. Closest launch is Bob's Beach park at Stevenson. Thus the name of the "contest" became "Bob's run" 1 and 2.  Run 1 is from Marker 14 to 15. Run 2 is from Marker 14 to 15 and then continuing to a line drawn from the Stevenson pier across the river. These lines are able to be determined visually by the windsurfer competing so it is a true solo endeavor. Run 2 is not always possible as the wind drops off as you proceed upriver and I see no point in "limping" to the finish!

So here is the tricky part:
You MUST stay in the foot straps the entire run!
AND you must perform at least one regular gybe (sail flip and stance change with mast near body)
AND you must perform at least one duck gybe (clew near body sail flip and stance change).
No restrictions on board or sail size! Only one class for all (at this time).
If you come out of the straps or fail to do both jibes (of course you can do as many as you like) you must start over. There are many days where just making it to Marker 14 deserves an reward (it takes about 10 times as long to get there vs. the blast back).

I can not fathom a way to pull this off without using a repositioner.

Proof and timekeeping is done by contestant worn video (such as GoPro). Yell out the start and finish so you can review the video and determine the elapsed time.

P.S. The board I used is the FoaB( see earlier posts). It is now my favorite light wind board and preferred for heavier beta testers or demos.
P.P.S You have not seen the MoaBmobile aka Great White (Sprinter van) for awhile now because the engine blew up. It is in "surgery right now getting a transplant". I'm hoping the patient does well and gets out on the road again. We miss her!
Y
Posted by Peter Schulz at 12:08 AM