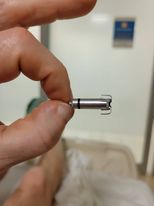 Our Founder, and primary Inventor, recently had this miraculous devise implanted into the right ventricle of his heart. It is a MICRA single chamber LEADLESS pacemaker from Medtronic. He had a 2-chamber pacemaker with 2 leads previously and ended up fracturing both leads ultimately which led to a serious malfunction of the unit which damn near killed him. He was, and still is, a very active person, and was our prime prototype tester, so you could say that he suffered a near fatal work injury!

It is quite probable that his duties on behalf of Disruptive Wind caused one lead to fracture last year and then the other to fracture last month (March 2022). The great news is that he almost fully recovered and now has NO leads to worry about. This is vital for our prototype testing and experimentation. We wish could talk about the projects we are working on currently, but we are looking to Disrupt an area of high focus right now. Secrecy is imperative. We will give a hint in that it does involve lifesaving, life enhancing, fun as well, and will do so in an environmentally friendly way as much as possible.

OK, another hint, it does involve wind and water!

More hints may be revealed from time to time on our Facebook page: Disruptive Wind.

The quantum physics discovery will be used to aid us in our endeavors, but we see no commercial application at this time.

Looking forward to bringing you along as we move fast, build awesome things, and live in the future!

Posted by Peter Schulz at 12:30 PM No comments: