Time to fess up ?

This post is about SECRETS and teasing , both of which I unabashedly admit to.

You will NOT hear everything on this blog. It would ill advised from a business standpoint.
Besides, both people and companies ask me to keep some things confidential. I will do my best to do so. I have my own secrets as well. I was going to do a blog post "Who is Peter  Schulz?" and give all sorts of interesting, and probably surprising to many I know, stories and facts about my prior life. Common sense has me holding off , at least for now. May have to wait for my autobiography... 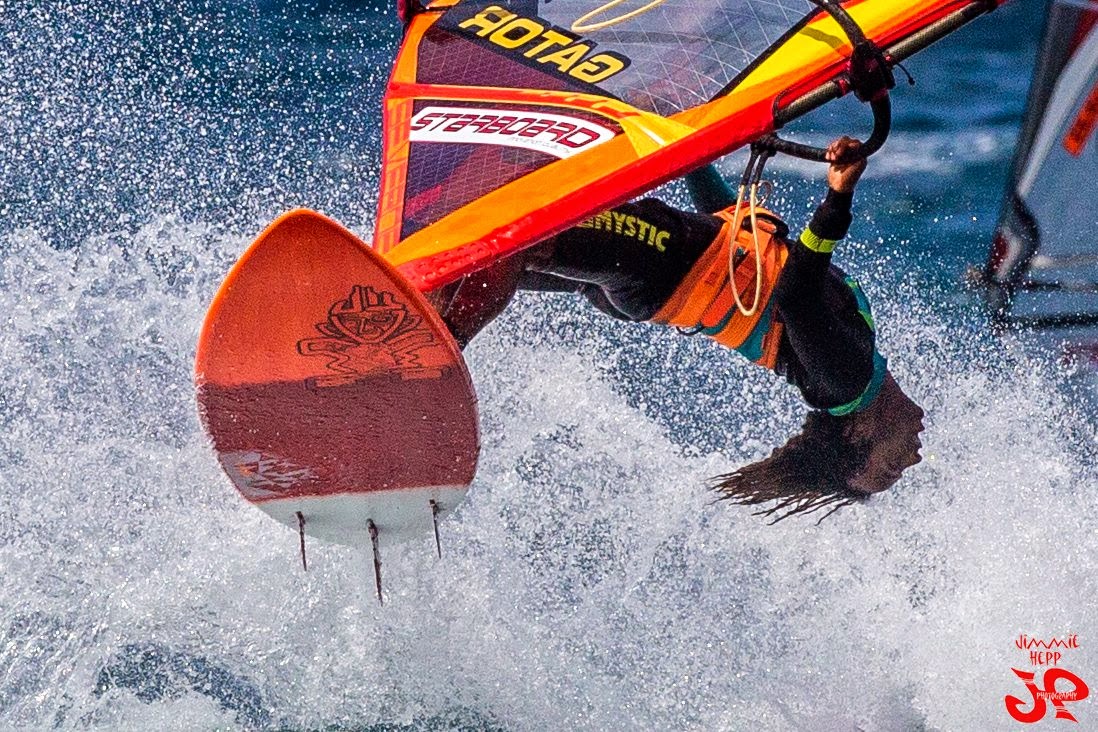 Teasing: Here is Boujmaa Guilloul on a new board being tested on Maui (photo by Jimmie Hepp).
Is he using a MoaB (TM) repositioner? Can not tell just from the photo. I am not going to tell you either. You'll have to ask him! I can only imagine his response. Then you really will be wondering.

At times I am going to allude to something and then not explain or give details. This is foreshadowing (hopefully) and will be important to the final story, if all goes right. I do get very excited about new ideas, and experiments, and just have to say something sometimes.
Like Project Mass Force! NOBODY knows what this one is but me. Almost ready for testing on the water. It will be tested in utmost secrecy. And almost certainly NOT in the Gorge or on Maui. If it's a big failure, or even just disappointing, well then I have wisely managed not to let anyone else down.

The bottom line: I am NOT going to be inaccurate or try to trick anyone. I AM going to try to deliver on what I talk about hoping to achieve. I AM holding a lot back, mainly because I do not yet have indisputable  PROOF. Another reason is lack of time to put together yet another video. Or I have somehow missed that I have yet to communicate something. Or it is just too much, too soon.

Yesterday, I ran into a good friend, who I rarely see anymore, who lives at the coast. He is friends with me on Facebook. He made a comment that I hear a lot    " I like what you are doing, but I do not really understand it". He does not windsurf. I get this even from some folks that do windsurf. I even get this from folks who do this for a living! It's a big challenge. The old way is quite ingrained in many.
Change is hard. I get this.
I will do my best to ease your way...     - Peter 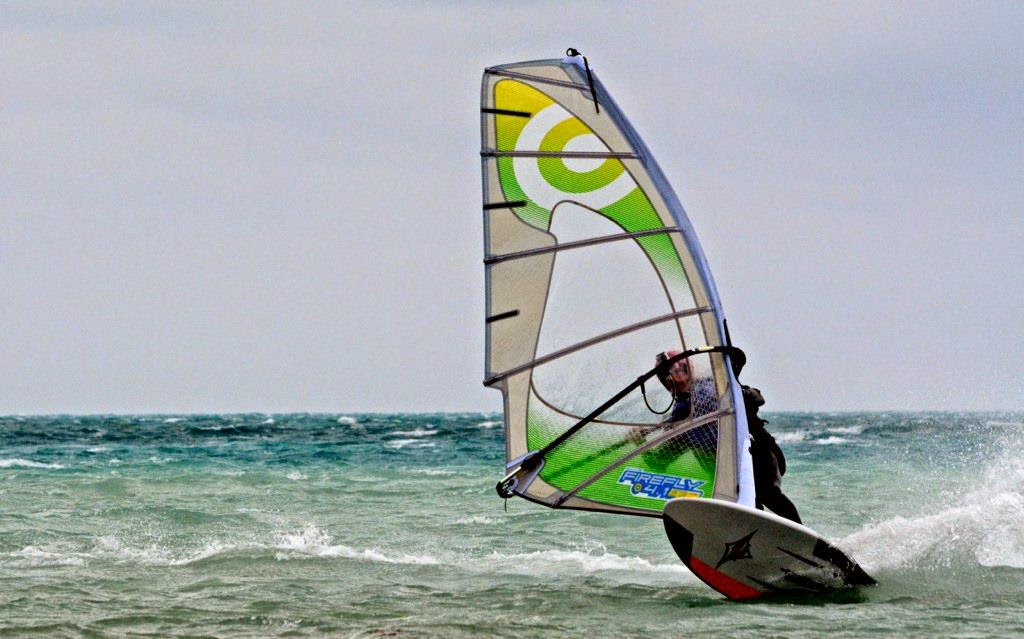 Greetings,
That's me in the picture above showing off for free.
I'm currently working hard to fill the demo van with great stuff for our upcoming road tours.
Money is tight. R & D is expensive. Our demos are going to be FREE.
So here is a plea for more stuff!
Please consider the value of using some of your sponsor $$, marketing $$, or any other $$ you can free up to help us out and get some great exposure for your products and/or brand.
I was just looking for more boards, but it would be great to have entire rigs ready for folks to try out.
So sails, booms, harness lines, stickers, flags, tech. equipment, new innovations, swag, etc.. or just plain $$ would be  most appreciated.
Advertise on the side of our van. Use us in YOUR advertising.
Show the world your company is serious about supporting innovation.
Be a part of inspiring the future of windsurfing!
Thank you.

So here is a fun video Emma made at my request for some free smiles! Uncensored warning.

Have a great day!
Peter Schulz
Posted by Peter Schulz at 9:32 AM No comments:

Is Peter Schulz the World's Best Windsurfer? No hype here! 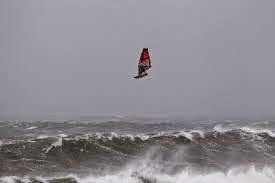 Warning; I'm about to repeat myself here on some things.

The purpose of this "secret" yet public blog is very simple. The idea is to provide a means of following what is happening with Disruptive Wind without folks having to contact me directly. There are some big players that are following what is going on that have chosen to hold off on direct involvement until they become convinced that this is "REAL". This is indeed the largest challenge to overcome. Our modern world is now so full of "HYPE" and outright scams that everyone is justifiably wary of new claims.
I have gone to great lengths early on to keep this a secret. Now that a strong USA patent has been granted, I am still "laying low" but would love to get a major player involved as this would bring this great idea to the world much faster and make those involved  a bunch of money sooner. Of course there is a real threat to those not involved and that is why I have also gone to great lengths not to promise anything I can not deliver on. And, more importantly, not claim anything that can not be easily proven to be true. REAL, valid, honest. No hype here!

The bolt-on idea was included in the patent application at the start. However, even I was not convinced it was the best way to go. But, at the prodding of Naish, and Rich Mitchell, I decided to give it some attention last summer. I roughly put together a prototype and put it on a Starboard Starfish, a compact wave board with a wide tail , thrusters, and parallel rails (precursor to the Black Box, and even more recently, Fanatic's Stubby). The "Fish" got wet for the first time with a bolt on in the surf off the Oregon coast. Within seconds, I knew I had a winner! The ride was so comfortable and the control was so enhanced. The board is more responsive compared to the fixed strap version as well. It instantly became, and still is, my favorite.
I went on to test and refine the concept. There were missteps and set backs along the way. A helmet cam helped with analysis and improvement. I was being very careful not to get hurt as I was the only rider. I refused to let anyone else try it initially as the last thing this company needed was the bad publicity of someone hurt, aside from my own personal caring for others welfare!
Time flew by, and the concept continued to be a winner. I did not get hurt, and realized that this thing is actually safer than fixed straps, because the footdeck will rotate during a fall to let your foot escape.
Time to get some other folks to try it out! But nobody would. "That thing scares me!" I heard this from almost everyone I asked, even some world class professional windsurfers (who I shall not name as I like these folks and have zero interest in embarrassing them) from the Maui and Columbia Gorge scenes. "But I'm doing it, did you not see me out there doing duck jibes?" I would reply.
Then comes the ultimate reply " How do we know you are not the world's best windsurfer ?"

Am I the world's best windsurfer? Absolutely not! I'm just the guy who invented the world's latest/best windsurfing innovation. I just need to prove that claim. So, obviously, helmet cam footage is not a good way to do that. So towards the end of the season, I figured out a clew mount set up for the GoPro Hero.Worked great as far as showing the simple footwork. Very unimpressive however, the fisheye lens brings big swell down to little bumps or makes them disappear altogether, The places I was windsurfing at did not offer good vantage points from shore. The Airdog drone was not ready yet.
I finally did get a couple of experienced windsurfers onto my "Fish" and they took right to it. Brought tears to my eyes!  Sadly, did not get any video or pictures at all. I resolved to do things differently this year.

This year: "Fleet" of demo boards of different brands, styles, and sizes.
"Beta tester" boards dedicated to individual windsurfers.
Large Sprinter van to haul all the boards and set up demo events at the best places.
A second GoPro Hero and multiple shore cameras to use at locations with vantage points.
I plan to video floating in the water while using the second GoPro.
Blog updates and videos as frequently as possible.
Involve more people,  hopefully get major player(s) to be proactive rather than reactive.
Keep it REAL, and prove this is a winner!


Not having heard back from Fanatic yet (I am sure they are quite busy as are we all!) I wrote them again today:

"Greetings,
I wrote to you earlier about the possibility of adding your new Stubby to our fleet of demo boards that we will be traveling around with to popular windsurfing sites this season in mainly the western USA, specifically Oregon coast ( on shore to side shore waves) and Columbia River Gorge (large river swells/ chop/ etc.) for the majority of our tours.  See our blog at www.disruptivewind.com for more details on what our innovative company is up to!  I have been following the news on the Stubby and with more details released today, it does seem exactly like the concept we have been working on to complement our MoaB (TM) repositioner. We were actually secretly working on almost exactly the same concept. Rather than compete (since you beat us to the market already!)   it seems logical to work together to bring windsurfing to the future.
We do already have participation from Starboard, JP,RRD, Naish, and more, and would love to have your brand (does not have to be just the Stubby) represented as well. Also, other business arrangements/ideas would be considered as well.
If you are NOT interested, rather than not respond, could you please briefly tell us why? We could then craft an appropriate response to our customers that would be appropriate and respectful as to why you chose not to participate.
Thanks,    Peter Schulz  (head of product development/ marketing, yes , we are a very small company )"

Enough desk work for today, back to the hands on stuff!  Be well...
Posted by Peter Schulz at 1:52 PM No comments:


Greetings, and Happy Birthday to Emma!

All new prototypes will have removable and interchangable footdecks. Trainer versions will have an  added trainer footdeck in the back position. When all 3 footdecks are screwed in tight, the board can then be used in "fixed strap emulation mode". This allows the rider to get used to the board with the MoaB unit attached and also to adjust the foot straps to their feet. Then the trainer footdeck is removed and the other 2 footdecks are loosened to achieve active mode. Jibe on!
Posted by Peter Schulz at 4:49 PM No comments:

No news is good news!

Reached a tipping point, there are not enough hours in the day!

I think I'm getting the right amount of exposure here at the current time. Just got an offer from China to manufacture. Wary of being scammed. Not responding. If you are a board builder (large or small)  and want to provide a board for our demo fleet / beta testing , I do want to hear from you until we have the desired number. Your board will be videoed in action and you will have pre-approval rights before anything is made public. Free positive advertising. This should be a win-win situation!
I'll get out a post later about how locals can become an official beta tester.
Also, Disruptive Wind is on Facebook: https://www.facebook.com/disruptivewind

Posted by Peter Schulz at 2:10 PM No comments: