Turns out I was also caught by Stawicki as I arrived on the famous downwinder that set records from Viento to the Hatchery. He took 25 pictures of me! Fairly sedate stuff as the wind was dropping fast and left me floating just east of the Hatchery 2 miles short of my Hood River goal. I had to swim in which was no easy trick as I was firmly in the grip of the locally strong current.

Today's true topic : Disruptive. The MoaB (TM) positioner (patent # 8,870,615) makes drop hopping and all kinds of cool fast jibes fun and easy. But what I envision disrupting the sport of windsurfing is the vast majority of "failed" jibes , which are not failures at all. I call them "dunk" jibes and a good example of one is seen in the video at the 5 minute mark. This 10 seconds is the most significant of the video. Because the ability to learn a SURE THING can help everyone from a learner to a racer to an expert. More about this later.

I am leaving for a month on a discreet project, code named "Dark Side". I will be off the grid in a remote part of the world. I may not be able to communicate electronically.
I'll blog again as soon as I can. Wish me luck!   - Peter
Posted by Peter Schulz at 4:03 AM No comments:

Small world. It appears that I am in this video (at 30 seconds, look for orange sail on the left). I maintain that my version of "drop hopping" is more fun! (And it's just one of the many things you can do on a windsurfing downwinder)
Drop hopping defined : after riding straight down the steep swell (dropping in) , using a burst of applied energy (if needed) to climb up the back of the next swell and drop in on that one and the next and the next,,,,each drop is a huge rush, very addictive!
I would have to say I got hooked on this doing downwinders off the north shore of Maui, such as from Ho'okipa to Kanaha. Swells the size of houses that roll on for miles and miles...

Stand Up Paddleboarders are catching on to drop hopping in a big way. As seen in the video above. Not only do they get the repeated "surfing" thrills, but drop hopping for them means they can use the power of these swells to dramatically reduce their own energy expended to get from start to finish.

I got my first taste of it over 3 decades ago when I was a young and crazy surfer. I loved going out in giant surf and riding the whitewater. If you can catch the right wave: faster and larger than the others, it will overtake the waves in front and you can "go down the stairs" as we called it back then. I'll never forget the 9-12 foot swell (~20 foot face) that I caught way out at "The Point" and rode half of a mile all the way to the beach, dropping down a dozen or so "stairs" in the process!

When drop hopping windsurfing in the gorge, the perfect situation exists when the wind is NOT perfectly aligned with the river and the power of your sail is just enough to climb over the next swell back without a pump. Then you can head straight upriver going fast and furious on a wild ride that does not even seem possible. There's nothing like it!

I'll try to pick out a short video clip later. Meanwhile, I've got to pack for a month long overseas adventure! - Peter
Posted by Peter Schulz at 9:53 AM 1 comment: 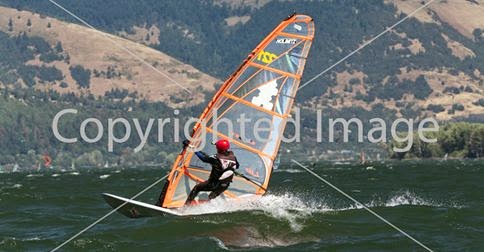 I feel like the luckiest man on the planet. - Peter
Posted by Peter Schulz at 10:31 AM No comments: