Turns out my injuries make it hard to type so bear with me please!

At the end of part 1, we had broken down at an unknown beach access off California's Highway 1 and spent the rest of the night there. We woke up to clearing fog, a sunny and cold morning. Took the dogs for a walk to find the ocean, but we were in an area of "endless" sand dunes and so we only saw the distant sea from on top of a high dune after a half mile walk. Worried by all the broken glass in the parking lot, we headed back to our home away from home.
Hoping for a miracle, I started her up. Running as smooth as silk!
Stowed our loose items and drove off. Almost immediately the engine began running roughly and without power. Limp mode is back. Up to maybe 50 MPH on a flat straight road. 15 to 25 on any hill at all. We put up a sign on the back to warn those behind us: 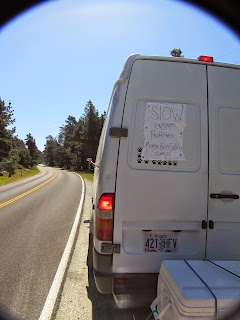 It was time to find a mechanic!
The first town we came to was Point Arena. Stopped at the gas station and talked to the friendly owner. Turns out there is someone in town who does know diesel engines who is only a couple blocks away. He was able to help us right away and his engine code reader informed us that injector #1 was not functioning. He explained how the transmission/computer handled running on only 4 cylinders and that the transmission was fine. He felt that this was probably due to a clog which is very common, especially with bio-diesel as a ubiquitous component nowadays. Could even just be water in the fuel. Solution? A product called Diesel Catalyst which would be available in the next town of Gualala. Just add it to the fuel and drive a couple hundred miles. So, we proceeded to do so. Easier said than done by far! After limping to Gualala, we finally obtained the Catalyst after a long process and proceeded down the coast.
I thought about our issue as we slowly made our way south. I decided to install the new fuel filter I had "thrown" in during the big pack up. We pulled over at a scenic spot and I got to work. Never having done this complicated procedure, I was aware that this was a big risk and we might have to be towed! Confirmed we did have cell service. The tools and car parts were in the bottom of our large stack of totes so we had to unpack quite a lot of stuff. Panic set in as I realized I did not have the proper hex wrench to remove the sensor from the old filter. Searched the entire van from one end to the other. I was sure I had thrown in a set set of hex wrenches last minute. Could not find them! (I found them later in the trip in a place I would not expect) But I did find the vehicle tool kit "hidden" in a special compartment. In that tool kit was a star drive of the proper size! I dove in on the repair.
Meanwhile, Emma was growing bored and with the ocean not accessible, she asked me to take a break and take some pictures of her "fun": 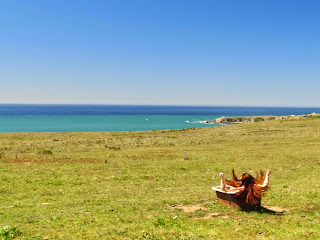 She was having a good time working on her "full tan"in the blazing California sun. Sadly the other pictures, although great, I have been banned from sharing. 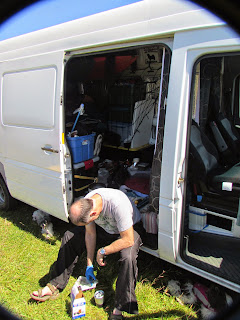 While we were having all this fun, a couple of law enforcement vehicles drove by. Sure enough, the second one of them decided to pay a visit. A very nice female Fish and Game officer pulled in while Emma frantically rushed to put her clothes back on.. "I couldn't help but notice the lack of clothes" she says to Emma, now wearing shorts and a bra. Emma explained  that she was just having a little fun while I worked on the Van. "Are you guys doing any fishing or hunting out here?"  We kinda laughed and said we were just taking a break to work on the van.  She looked at us, and our 5 dogs and subtly mentioned that clothes should be worn at all times and then continued on her way.
I finished up the repair and started up the Van.  No Leaks!!
No improvement either, but at least now we know there is clean fuel going to the injectors.

It was a long, long, long limp to Samuel P. Taylor, but we did manage to get there just before dark. 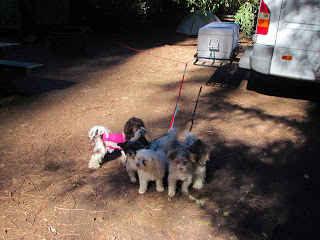 We had planned to meet friends for a fabulous camp out but they had stayed at the site the night before and had had a cold miserable night so decided not to repeat the experience. Just us and our dogs, we had ourselves a nice camp feast and a huge campfire.  We decided not to pitch the tent.  In fact, our van bed was so comfortable we didn't use it once the whole trip. We had a great night just relaxing.  The only ones unhappy were the dogs who had to be leashed because of all the poison oak.